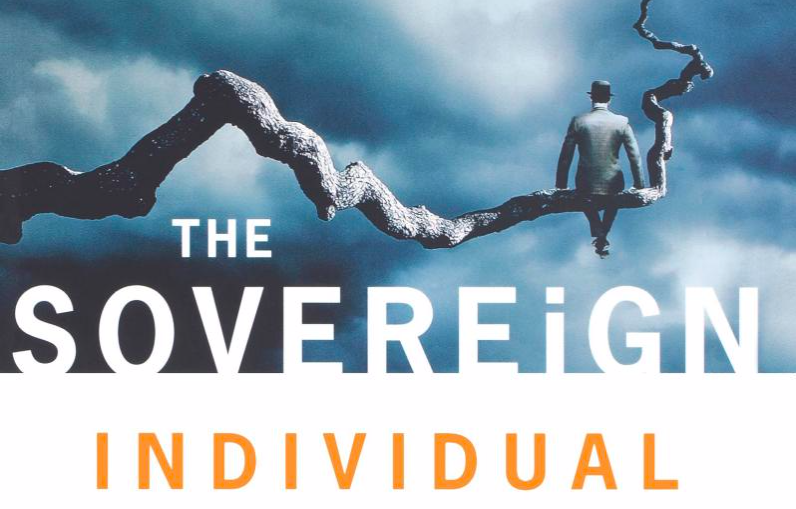 The Sovereign Individual explores the social and financial consequences of [the] revolutionary change [to the information age/society]. Our desire is to help you to take advantage of the opportunities of the new age and avoid being destroyed by its impact. If only half of what we expect to see happens, you face change of a magnitude with few precedents in history.

This is how the book starts and it does quite impressive job outlining the future. It’s incredible that this book was written in 1997, ten years before the iPhone, Bitcoin and 7 years before Facebook. Yet it predicts those things pretty precisely.

But let me start from the beginning.

The authors argue, that history is defined by what they describe as „returns to violence“.

The argument is simple: Since the agricultural revolution took place, the concept of wealth and property became major economic drivers of history and society. Before, possession and property were rather abstract concepts: Why would you care about owning land or property, if you don’t stay anywhere?

The agricultural revolution changed that significantly as land, resources and labour suddenly became scarce resources. As you probably remember from history class, nations became a concept that was known from the old Egyptians on. However, the concept of “the nation state” from back then is not even remotely similar to what we experience as nation states today. People would sometimes change nationalities and religion multiply times in a lifetime – sometimes without even knowing it.

Only around the early 20. century, nation states as we know them became a widely adopted concept. Why? Because the returns on violence changed, Davidson and Mogg argue. As technology developed, the average person had easy access to weapons, therefore security became a major concern for the general public.

But of course not only security within a society but also security in terms of securing borders. Therefore the need for national security emerged, which lead to executive infrastructure like police and the army. The question is, who is going to finance this? The citizen of the state of course, so it became a major competition to find a system that would allow to finance a huge army.

Nowadays is it clear for us, which system would be the winner, but for a long time this was not so sure.

Davidson argues, that democracy won the race out of one simple reason: it is the most effective system in generating money from the state’s citizens because it lets people compete in a free (capitalist) market. This would lead to economic growth while still collecting enormous taxes to finance the army and police.

Looking into the future

According to Davidson and his co-author Mogg, the shift from the industrial age to the information era marks a similar tectonic shift as the agricultural revolution a few thousand years ago. It will just not take almost 2000 years for it’s consequences to unfold.

And boy – they came up with some wild predictions: The death of the nation state, revolutions in medicine (tele-surgery), information at your fingertips, nation independent currencies & communities, the end of society as we know it.

Even thou not everything happened (yet), Davidson and Mogg are right with many implications.

The end of nation states

Digital communities lead to a globalized world, where ideas can be exchanged freely and borders don’t matter that much anymore. Digital assets will be transferred easily and without taxation: computer code, currency or knowledge.

The information age will further divide society into winners and losers, as many jobs get automated. This dynamic will create “sovereign individuals” – people that build a skill set that makes them independent of national structures. The rest will become losers of this dynamic.

The authors argue that those sovereign individuals would find ways to escape taxation as they can escape the high-tax nation state to a low-tax environment.

While this didn’t happen entirely how they predicted, a good part of their argument has unfold: The world has become a place, where people without computer skills have a major disadvantage. In fact, if you want to become a entrepreneur nowadays, you probably have no other choice anymore.

Many of the wealthiest individuals are already shifting their taxes via the Caymans, but many states made this illegal practice. Just lately some famous soccer stars have been convicted. Still, Davidson’s prediction is probably not entirely right in this regard as this is not an easy endeavor, even for the technologically savvy.

The internet as a law-less space

Further they argue, that the internet is a space that governments have a hard time getting a grip on. They compare it to the open waters of the ocean, where where also nations have a hard time executing their laws.

I don’t think that this really happened yet, mainly because “the harbors” (the entry points) are still controlled by states. At the same time, I don’t know anybody who ever paid taxes for their crypto gains (probably, because most people lost money in the bubble thou).

However, if you ever wondered why some people are so enthusiastic about cryptocurrencies, this book will give you a glimpse of an idea: It’s the first time, that a currency exists that is not bound to any single regulatory authority.

This is the major promise of crypto: by running applications entirely decentralized, no single entity can change the rules. This is like the Dollar without the FED, the Euro without the ECB, Social Media without Facebook or Ecommerce without Amazon.

Artificial inflation does not exist in the cryptosphere.

Reading this book, one has to admire the amount of foresight Davidson and Mogg had. Recall, this  was written in 1997:

As artificial reality and computer game technologies continue to improve, you’ll even be able to order a nightly news report that simulates the news you would like to hear.

We are rapidly moving to a world where information will be as completely liberated from the bounds of reality as human ingenuity can make it. Certainly, this will have tremendous implications for the quality and character of the information you receive. In a world of artificial reality and instantaneous transmission of everything everywhere, integrity of judgment and the ability to distinguish the true from the false will be even more important.

Adobe and other companies have developed AI algorithms that can turn a piece of text or speech as it would have been spoken by anyone. Even more, the amount of fake videos technology has evolved to a degree that makes it increasingly easy to produce content.

So how in the world should we be able to distinguish real from fake news in the future? The borderless and lawless nature of it will make it certainly very hard. (Remember the scandal around the greek finance minister Yannis Varoufakis showing his middle finger to Germany?)

I explored this dynamic deeper in my post about the Austrian elections in 2017.

The very glut of information now available puts a premium on brevity. Brevity leads to abbreviation. Abbreviation leaves out what is unfamiliar.

This danger of (fake) news is fueled by the fact, that we are exposed to such a mass of news. So we default to only skimming headlines and don’t get more into the details of the content. We a lot less time to research, ask questions and engage.

From my perspective, this is one of the reasons where the internet backfires on our society: we have more choices than ever before, the world is more convenient than ever before and we have unlimited information access.

Good things, on the surface.

But more choices are not always better, and may lead to dissatisfaction in life.

Convenience leads to less human interaction and obedience because everything can be ordered from your couch.

And finally it leads to information overload, which leads to superficial reading and a tendency to give to most attention to the loudest voices.

On morality in the internet economy

Finally, one more prediction from the book that – as a techie myself – I have a hard time swallowing:

In science, three thousand years completely changed what human knowledge is; in morality, we may actually have fallen back.

This inadequacy in the initial moral education of what will be the dominant economic group of the next century is likely to be reinforced by their life experience. These people will have the discipline of an advanced technical education, of one sort or another, to fit themselves for their new role as the leaders of the new electronic universe. But they will learn from that only some of the moral lessons that have historically been the framework for human social conduct. By the standards of Confucius, Buddha, or Plato (500 B.C.), St. Paul (A.D. 50), or Mahomet (A.D. 600), they may be moral illiterates.

From my perspective this is a general issue in our education. People get trained extremely specific on their later job, but often lack broad education in the humanities.

Now, it’s no question that the combined IQ of a company like Google is higher than that of NASA. But first and foremost we live in a capitalist society and information technology is nothing else than another tool to generate profit.

Therefore, instead of achieving great things for mankind, the IQ is put to work on optimizing ad clicks. Morale and the good for society mostly drifts into the background (Facebook influencing elections, monopoly claims again Facebook, Google and Amazon).

To Davidson’s argument, I think he has a point: It’s not that the leadership or the employees of those companies is trying to harm people. They are just part of an incentive system that rewards this kind of behavior.

From my perspective, it’s time that all of us in technology become a bit more humble: People in the (computer) sciences often look down at the humanities and by doing so miss the bigger picture.

However, those scandals around tech companies should teach us an important lesson. This is what happens when morale and doing good drift into the background.

Overall, I really enjoyed the book for it’s though provoking ideas. Check it out on Goodreads.